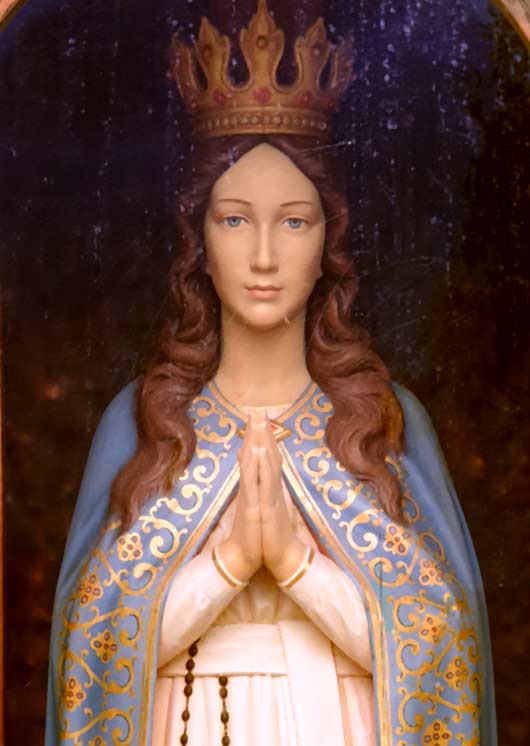 July 13, 2016 - Wednesday - Anniversary of the Rosary Mysticism and Fatima Day. Our Lady speaks after the Holy Sacrifice Mass according to Pius V through Her willing, obedient and humble instrument and daughter Anne.

In the name of the Father, the Son and the Holy Spirit. Amen.

I, your Heavenly Mother and your Rose Queen of Heroldsbach, speak now and at this moment, through My willing, obedient and humble instrument and daughter Anne, who is completely in the will of the Heavenly Father, repeating today the words that come from Me.

Beloved Marian children, beloved little crowd, beloved followers, especially you Muldans and beloved pilgrims from near and far, I love you all and today I want to give you some instructions for your togetherness in the sense of life of the Divine.

Yes, you have understood correctly, My beloved ones, I am the Mother of Beautiful Love. Love is decisive with Me. Since I love you so much, My beloved Marian children, today I want to give you the instructions for your future life. It will not be easy for the coming time to withstand this storm of the world and the Church. Yes, as you have heard, today the fire is burning brightly in today's church. That is, people are blaming each other for the mistakes. You don't fix them and you don't talk about how to start over, but you continue to make the same mistakes, because the blame always lies with the other person. You must start with yourselves first. So today I want to say to you, "Begin with your own guilt and sweep at your own door. There is enough filth there to clean up."

You, My beloved ones, are protected and given special instructions to be able to change. Now your will is added. "Do I actually want this?" Do I want to change some things in my life when Our Lady has provided it? She always follows the words of her Son Jesus Christ in obedience.

In the same way, we should speak a free fiat to the will of the Heavenly Father in the Trinity, even when it seems incomprehensible and difficult. The love of God will flow through us in the Holy Spirit.

You are the beloved and chosen ones of the Heavenly Father.

Some things He wants to change in you and through you. Interaction with each other is important, My children. Be affectionate with one another. Remain in love and change in it if it is in accordance with Heavenly Father's will. If I try to do everything that is in my power, I please Heavenly Father. But if I impose on the other person everything that I could actually take into my own hands, Heavenly Father does not agree with me.

There are active and inactive people in terms of a person's character. Therefore, I cannot say one is like the other.

However, you can all make the effort, if you want to get along, to resolve the disagreements that arise in a community. Disagreements result in trouble and multiply. You are to be one in the will of Heavenly Father. That is where the common thread runs through your community. Go toward one another. You all have your weaknesses and faults. None of you is flawless, only your dearest Heavenly Mother. I, as Heavenly Mother, was conceived without original sin and gave birth to the Son of God. You should listen to Him. With Him you shall master everything, who lives and works in you.

This effectiveness, My beloved ones, can increase or decrease if you put the human first. You can offend the other person. Basically, then, you have offended the Heavenly Father in the Trinity. In Him, the other works and is the other. You must believe this and it must become your goal. Your will must first become conformed to the will of the Heavenly Father. You will not always succeed. For that you are human and flawed. Only I, as your dearest Mother of God, have never committed a sin in my life.

I want to guide you in the Holy Spirit. I can do it as the Mother of Beautiful Love. Always look to the Divine Love. Unite yourselves in it. No one can testify that I am right and the other is always wrong. It always takes two, the one who thinks he is right and the other who proves him right. If it happens like this, it is not in the will of Heavenly Father. To approach one another means to let the other be as he is and not to reproach him in order to want to change him. I should meet him lovingly, even if he has committed a mistake. I may call his attention to it, but then lovingly and considerately.

If he does not change, I cannot command and challenge him. Then enlist the help of the angels and also the Holy Spirit. Above all, call upon Me, as Heavenly Mother, I will help you to continue to learn to treat each other lovingly. It is a learning process that is still possible at any age. This is how it should be today.

People today no longer respect each other, but each sees only his own advantage. Love, true love, is disregarded. Human love and Divine love often do not coincide. I can love the human being without adding the Triune loving God. Then I respond to the demands of the other. Human peace is then certain for me. But I do not pay attention to the fact that I do not do any favor to the Heavenly Father, but exclude Him. I do not ask Him, "Dear Heavenly Father, what do You want to tell me with this?" Either deal with the weaknesses and faults of the other, or I recognize my own. You must approach each other, and not maliciously disagree with each other. You should become one in faith again. This must remain your desire and will. In the future, it will not be easy.

Believe that I, as Heavenly Mother, will stand by you and love you also in that you can stand before Heavenly Father. You shall become more satisfied. You have difficulties with your egoism, your own "I". This egoism is also present in the saintly person. How quickly I see the faults of others, but not my own.

If you answer and remain calm, the Holy Spirit works in you. He gives you some knowledge that you did not have. Also, you recognize many things in silence, when you reflect, not brooding, which you did not recognize before in aggressiveness.

How quickly you reproach the other person for something you did not want. Then repent of it from your heart. Make use of the Sacrament of Penance and repent from the bottom of your heart. The Heavenly Father in the Trinity, Jesus Christ, the Son of God, will forgive you and embrace you again because He loves His children. Ultimately, He wants to have all His children with Him in the Eternal Glory. This is what you are heading for, My beloved ones. Do not disregard this goal.

Give thanks every day for what you have been given. Often you do not even feel how often you are the bestowed ones of the Heavenly Father. The gifts of grace do not stop, they flow in every Holy Sacrifice Mass.

When a sacrificial priest makes this transformation, the streams of grace are released. However, if that priest is in grave sin, no grace will be able to pass over.

So I tell you, your beloved Heavenly Mother, and wait until the faithful who are held captive in modernism want to repent. I will help you in whatever situation you find yourselves.

Call upon the angels to let you know where you have been lacking, so that you can start a new beginning. Every day can be a new beginning. Repent of your mistakes over and over again. This must be your future goal.

Your dearest Mother and Rose Queen of Heroldsbach, is with you. Today I, as Rosa Mystika, celebrate this feast, always on July 13 of a year. Therefore, special and double graces are released today.

Now, in Trinity with all the angels and saints, your Heavenly Mother blesses you, in the name of the Father, the Son and the Holy Spirit, Amen.