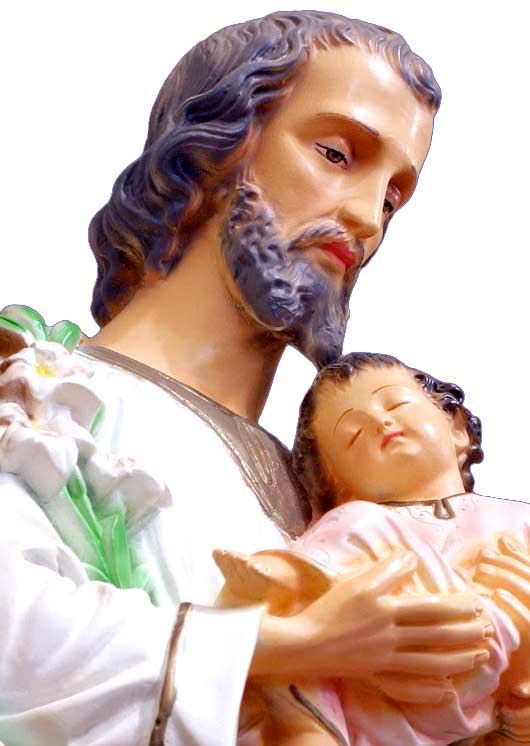 March 19, 2014 Wednesday - Feast of St. Joseph. St. Joseph speaks after the Holy Tridentine Sacrifice Mass according to Pius V in the house chapel in the House of Glory in Mellatz through His child Anne.

In the name of the Father and of the Son and of the Holy Spirit. Amen.

During the Rosary for the 'Unborn Life' and also during the Offertory Mass, Saint Joseph was with us. He appeared to me several times and pointed to the Blessed Mother and also to the Child Jesus. Saint Joseph expressed his gratitude for the abundant floral decorations that pilgrims sent him for his great feast day. Our Lady with Her rosary was brightly illuminated. St. Michael the Archangel struck his sword in all four directions. The Trinity Symbol and especially Father Kentenich, the Mother Thrice Admirable and also Padre Pio were bathed in a bright light. Jesus pointed to His heart burning with love and to the heart of the Blessed Mother. He wanted to say that these two hearts are closely connected and are burning with love for us.

My beloved children, my beloved little crowd, my beloved pilgrims from near and far, you have given me great joy for making this day festive. I have not been forgotten. The lily I hold in my hand is to symbolize my purity.

I have been keeping watch here over the House of Glory with Our Lady and St. Michael the Archangel for several years. I have appeared to my little Anne. From this house I was allowed to ask many graces from the Heavenly Father for you, My beloved ones. This house was also furnished according to my wishes. Many things would have been different if I had not made this request to Heavenly Father that everything be done according to His plan. I had great power in heaven over this house of glory. You called me, and you also appointed me as the patron of this house, who was to arrange everything in order. And that is what I have done. Many times you have experienced that things have been arranged that you could not have accomplished. I have taken care of the appointments so that everything could proceed in time.

Also today, on this festival day, you have received the awning and also the pleated blinds in your garden house and had them installed. This was predetermined by me. On this feast day I wanted to give you this great joy, because you called me again and again in difficult situations. I was always at your side. Often you were surprised how everything was done in order despite the impossibility. Phone calls were made where you could see that I helped you and I will continue to be at your side. Especially with the plating and the garden house I was always present and have ensured order and security that everything could be arranged according to the plan of Heavenly Father. Many times things would have gone differently if I had not spread protection over this house.

And now, My beloved children, you give me this great joy, that you honor me especially on this day. I thank you and I ask you from the bottom of my heart, continue to call me as the patron of this house, in all the situations that seem difficult to you.

My beloved Father Kentenich spoke to you yesterday. I am his name patron and I honor him especially. From heaven he has great efficacy. Therefore, call upon him again and again. He also lived purity. I was allowed to be the great example for him. For all priests today, like me, he wants to be the great example in purity, but unfortunately priests no longer pay attention to this purity. They no longer give themselves to the dear Blessed Mother and Her Immaculate Heart, otherwise this immorality would not have occurred among the priesthood. Pray and implore for the purity of the priests! Give it to Our Lady when you know that a priest is not in the truth and has deviated from the true path. Then intercede for him and beg me to be the patron of purity for him as well. The lily in my hand symbolizes this.

Many believers know that they can turn to me, especially in the hour of death. I will stand by them. I also want to help families when a marriage cannot be lived in order. Beg me when your marriage is in danger. I also want to guide your children in purity.

I love the Schoenstatt work. I want to ask for special powers for Schoenstatt. I have not been called upon enough, although my Father Kentenich always implored me so that his Schoenstatt Work would have the greatest efficacy in the world. And how is this work today? Actually, one could say it is on the ground. It has spread far and wide, but not in depth. The Schoenstatters lack depth. Pray that my Father Kentenich, of whom I am the patron, will be able to obtain many things from heaven for his Schoenstatt Movement, because the priests there no longer cultivate truth, but modernism. Nothing must be lost from the Schoenstatt Work, because it is destined for the new Church, as Father Kentenich was also told from heaven. He himself had visions and interventions that were not recognized and were not allowed to be made public because this great work was in danger. The Church imposed a 14-year banishment on him. That was bitter for him. And even today he weeps in heaven for his Schoenstatt Work. Everything is handled differently there, as it was in his time. But you, My Schoenstatt children, believe in the truth that must happen there. You have experienced another time, a glorious time. You have been trained and formed by Schoenstatt. You are still grateful for it today, because it has shaped you and you live from it every day.

I thank you, My beloved children. I will continue to protect you and keep watch over this house. I love you, especially in purity.

Look at your dearest mother, my bride, how I protected her, and how I was able to protect the Child Jesus. I adored it in the womb of the Blessed Mother. A great reverence I have felt for this most beautiful woman. I could never accuse Her of any sin, because She was immaculate. And this purity was something so noble for me that I had to fall down before Her. Everything about her was noble and so it should be with you, My beloved Schoenstatt children. I pass this on from your Father Kentenich. Learn from it even today. Nothing more beautiful can you experience than the education in the Schoenstatt Movement as it happened at that time.

I love you, and I will protect you fervently and protect you from all evil. Believe in the faithfulness and love that is given to you in great abundance of grace from heaven.

So may I bless you today in the Trinity with all the angels and saints, especially with my beloved bride, the Mother of God, in the name of the Father and of the Son and of the Holy Spirit. Amen.

Remain faithful to Heaven as I too have always remained faithful until my last breath. Amen.